Sir Hugh Robertson, the MP for Faversham and Mid Kent, has today announced that he will stand down from Parliament at the 2015 General Election.

Sir Hugh said:
“It has been a huge privilege to represent my own home area for the past decade and a half. I am very grateful for the hard work and support of the many friends in my Association who enabled me, firstly, to win my seat in 2001 and, then, to double my majority twice in 2005 and 2010.

“As a Minister, I was fortunate to have two very different jobs both of which I enjoyed enormously. As Minister for Sport and The Olympics during London 2012, I was part of a team that delivered the outstanding Games of the modern era and oversaw an unprecedented period of British sporting success. As Minister for The Middle East, North Africa and Counter terrorism, I had the opportunity to get involved in The Middle East peace process and to contribute to a part of the world that has fascinated me all my adult life and where I first saw active service as a soldier during the 1991 Gulf War.

“However, having recently reached my 52nd birthday, and with five year Parliaments now part of the political landscape, this is realistically the last opportunity to move on and pursue a new career outside Parliament.

“Both David Cameron in particular, and The Conservative Party in general, will continue to have my full and active support.” 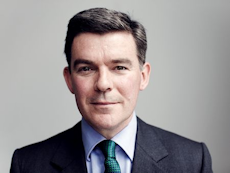